Monday, June 13th
The Champlain and Erie Canals were first opened in 1819. Although when travelling the canal today it’s obviously a relic of past times, there have been a number of upgrades in the past (almost) 200 years.

The Canals were an immediate financial success, as the fastest and most efficient way to transport cargo before railroads, highways and air travel.

From the NY State Canal web site: “Between 1835 and the turn of the century, this network of Canals was enlarged twice to accommodate heavier traffic. Between 1905 and 1918, the Canals were enlarged again. This time, in order to accommodate much larger barges, the engineers decided to abandon much of the original man-made channel and use new techniques to “Canalize” the rivers that the canal had been constructed to avoid the Mohawk, Oswego, Seneca, Clyde and Oneida Lake. A uniform channel was dredged; dams were built to create long, navigable pools, and locks were built adjacent to the dams to allow the barges to pass from one pool to the next.”

This is a “second-generation” lock, still tiny by today’s standards: 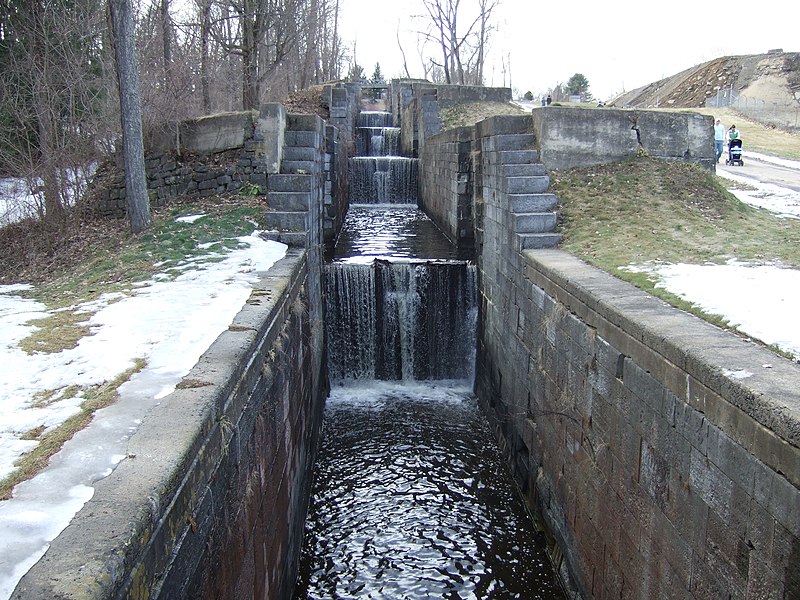 In many places, previous generations of canal are still there. During our stay at Lock #5, we were able to follow the old tow path along the old canal into town. In this shot from our tracking page, you can see lock 5 and where we stopped at the top center of the photo, and the old canal to the left of the new one. A little trivia about the DeLorme InReach tracking page. The InReach sends out our location every ten minutes. The tracking page joins these points with straight lines. In many places, we don’t go in a straight line for ten minutes. So despite what the track line on the web page shows, we really try not to travel over land very often!

There are cases, however, where the navigation charts don’t exactly match the real world. After all, when you’re in a canal, do you really need GPS to tell you which way to go? I guess there’s no real reason to update the charts to reflect the accuracy of modern electronics. So according to all of our different electronic navigation tools, we traveled quite a distance across solid ground over the past couple of days.