Tides are the movement of water up or down. The rising tide is called the flood tide. The lowering tide is the ebb tide. The regularity of the tides allows us to plan our travel around them.

When the water rises higher at one location, for example, the mouth of a bay or river, it flows to lower areas, into the bay or up the river. This sets up a tidal current which reverses with the ebb and flood of the tide.

Currrent tables can be used to look up when the flood and ebb currents will occur.

But you have to know which way is ebb and which is flood.

On a river which flows from inland toward the sea, like the Hudson, it’s easy. Flood is upriver, ebb is downriver.

However, it turns out the East River in NY floods AWAY from the Hudson, toward Long Island sound. The direction is actually listed in the current tables, if you remember to check them, instead of just assuming.

What’s all this leading up to? We hit Hell Gate in exactly the opposite state of current as I had expected. Instead of being wisked along at an extra four to six knots, we had to fight that extra current the whole length of the East River. Oops.

To add to the fun, low clouds and mist hid the taller buildings of the Manhattan skyline, and quite a few heavy rain squalls spoiled our views past the Pallisades. At times it was like some of our Maine travels; near-zero visibility. But here there are also other boats to contend with; everything from small sailing school dinghies to fast ferries and heavy cargo ships.

In between squalls we did get a few breaks that allowed us to fuel up in Jersey City and get a a few glimpses of New York and the Statue of Liberty. Fortunately, my current predictions were better for the Hudson, and we rode the last of the flood as far as the Tappan Zee Bridge. We passed slowly (to avoid throwing a wake) through the construction zone where the new bridge is being built. Just beyond the work barges for that project is the town of Nyack, where we’re guests of the Nyack Boat Club.

Here’s a stock photo (not mine!) of a typical buoy of the type above, without current pulling it under. 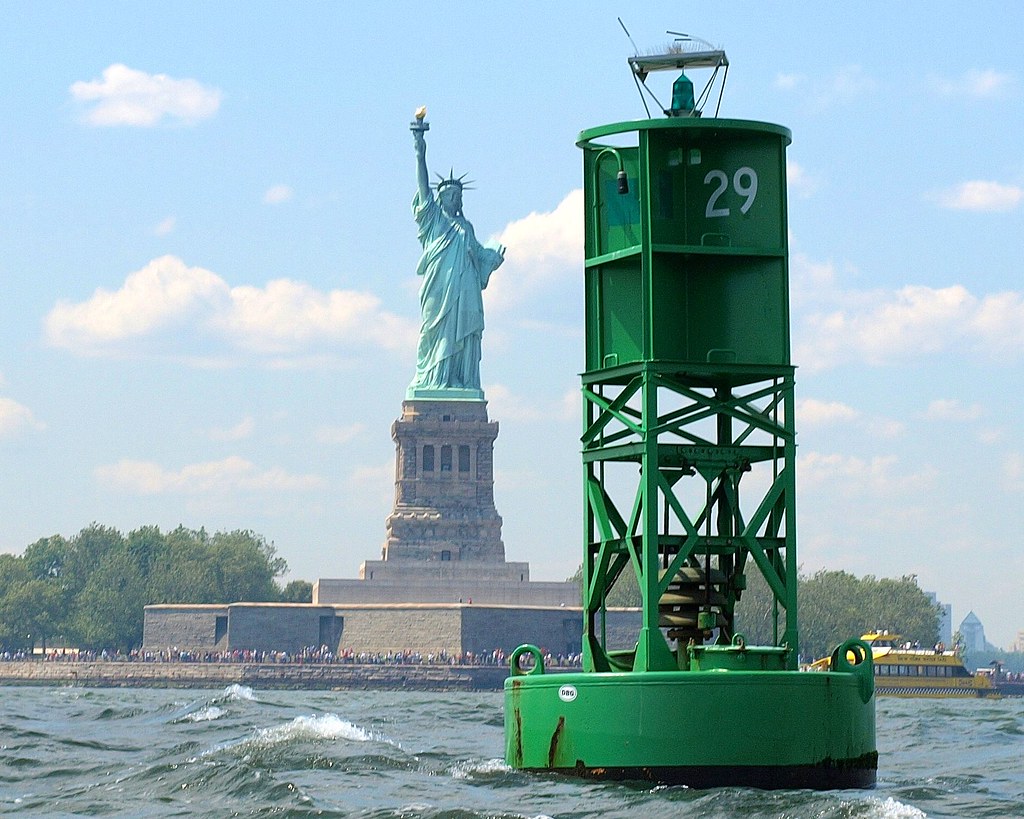 The photographer also picked a better day than we did to pass the Statue.